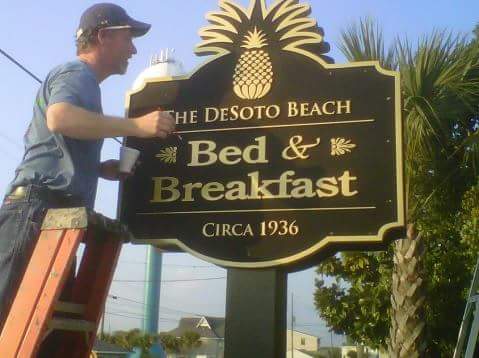 Having always had more of an interest in designing graphics and doodling on his folders than a lean towards academics, Wes jumped with both feet first into his planned future, by starting his own business the minute he left high school.  Having previously worked for years with his cousin Mark who taught him the basics of the sign industry – in a day when all pieces were hand lettered with paint and brushes, the technique now seems entirely antiquated, but of course there is still a small market for everything “old style” and Wes still possesses the skills, if the demand is there.

Canady Signs opened in 1991 and now mostly caters to the boating industry, but a good deal of his business still stems from store front signs and on vehicles as he had an 8 year hiatus learning to paint cars. Though TMI and other nautical ventures keep him busy, his largest and most regular account is with Old Town Trolley Tours of Savannah.  Wes offers a comprehensive array of services, but for TMI customers, he predominantly focuses on or is requested to renew or replace existing lighted signs, decals, hailing ports or even design something entirely new for a recently purchased vessel with a name change.

Wes operates his business alone, but occasionally recruits a helper, sometimes even calling upon his wife to lend a hand!  A family man at heart, he dedicates a large part of his free time to his 13 year old son’s pursuit of sports – particularly basketball and soccer.  Wes and his wife believe that Evan has the talent and interest required to go on professionally in the field of athletics. His family and his 2 Beagles (Max & Mabel) keep him busy enough that his own passion for golfing is taking a backseat to their combined mutual interests, often with the dogs getting first choice for some group activities!

His great pal, Billy Gartside of Waterline-Up (who is scheduled to feature in a future TMI newsletter) recommended Wes’ services to a few in the yard.  Word got around and not before long, Canady Signs was a regular at our facility.  Wes says he owes Billy big thanks for introducing him to TMI, but it would seem that we owe Billy too!