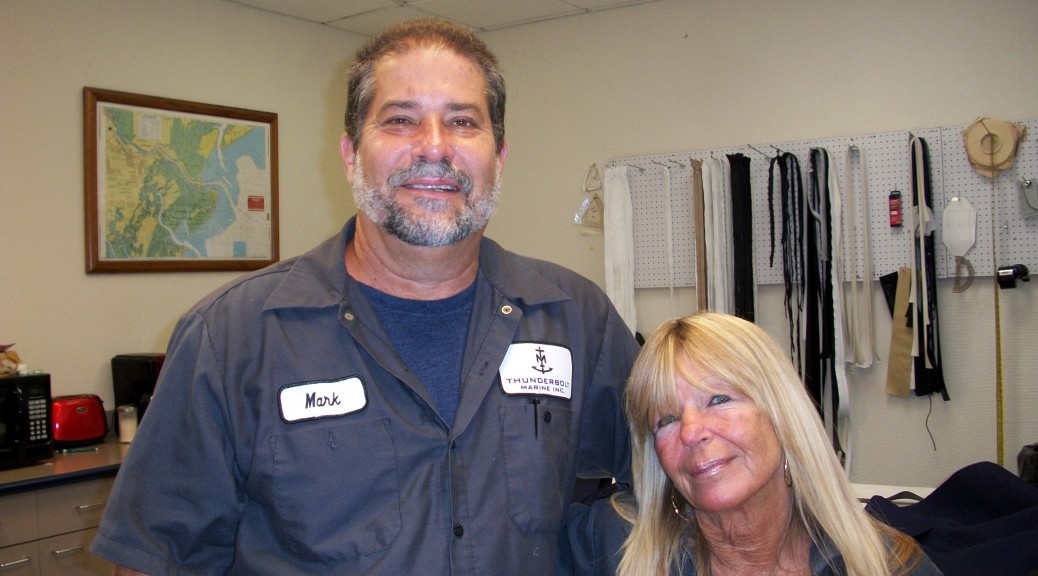 Judy and Mark both enjoyed fairly diverse backgrounds prior to working at Thunderbolt Marine in the Canvas & Upholstery Department since 2013/14.  Judy hailed from Ohio – a far cry from ocean and the associated nautical demands of stitching and Mark worked for several local yacht builders before they met in 2002 when their stars aligned (as did their careers) and they joined a company known to many as Sea Stitch, but now part of Thunderbolt Marine.  Having been married since 2010 and working for the same business, they are together 24/7 – not unlike many boat crew couples which can prove difficult for some, but not for these two who complement each other’s skills harmoniously both professionally and personally!

Mark processes and installs all the canvas covers (like Bimini tops and covers for example) that Judy, as the seamstress, makes with passion she nurtured 35 years ago.  Having been involved in many big projects since joining the TMI team, they both enjoy the challenge that each task presents even when the deadline is tight.

Their granddaughter Makayla who is their proud and joy, is now 17 and a senior at Islands High School.  She has been in their care and loved as their own child since she was 6 years old.  When they have a quiet moment, they travel to their “retreat” in Helen, GA  to get away from their Wilmington Island life with Makayla and their other two “kids” – Misty (a 10 year old Shih-tzu) and Skittles (a 6 year old Yorkie).

Mark particularly wanted to add that among their many combined achievements, he felt that wearing the TMI uniform was one of his personal greatest!!