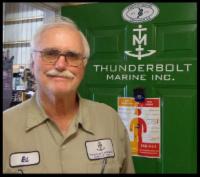 Ed has been working in the Machine/Mechanics Dept., for the last 8 years since he joined TMI.  After 2 tours in Vietnam as a UHI helicopter pilot, Ed, a native of New Jersey, continued his army career as an Instructor at Hunter AAF.   Upon leaving the army, he enrolled at Armstrong State to major in Economics.   For summer work,  he joined the  Savannah Machine & Foundry Company shipyard because of his interest with “all things boating.”   Working his way up the system through various departments and in a variety of jobs, he became a Ship Supervisor but has owned many titles in his 45 years within the industry.  Married with 1 child and several pets, Ed owns both a sailboat and a center console which he will put to good use during his retirement in June 2017. We will be very sorry to see Ed go but envy his opportunity to enjoy all the things he most appreciates when he has time on his hands – like finishing a custom made model boat which hasn’t (apparently) seen daylight since the late 80’s!   He enjoys every aspect of the ship repair business, evidenced by his work ethics and is no more partial to one particular task than another.  On behalf of everyone here at TMI and his loyal customer base, we wish him well for the fun years ahead and we thank him for his services to our country.